I decided I'd better put up something new here. I've been so busy with the Brouhaha over Spencer these days that I haven't been keeping up with my other blogs.

Funding for Suzie has stalled out and there is still most of the hospital bill to pay and the person who called with the promise to cover any remaining expensives that donations didn't - isn't jumping up to the plate to do that as quickly as she jumped up to make the offer. That has left Glenda in a very difficult financial bind. I'm really sorry I didn't do things differently there. We should have asked her to "put her money where their mouth is." Now I know what that saying actually means, but it's too late to help Glenda.

We’ve just been working hard on projects around here including some new fencing. Our neighbor Jim drives over almost every Saturday on his tractor and helps Rich out a lot with stuff that he’s been trying to get to for a long time. Rich helped Jim put up a new shop at his place and spent a number of weekends there on that, so our wonderful neighbor has been returning the favor. It’s nice when neighbors can help each other out that way! 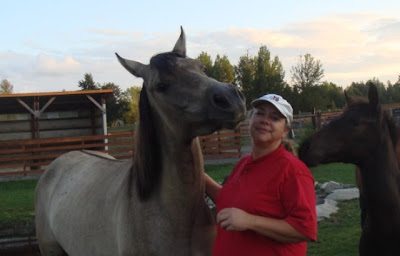 You scratch my back - I'll scratch his!

Jake, me and Neenah are helping each other out! Jake is the 3 year Quarab form Eastern Washington.

We've put in more fencing like what's in the background of this picture. The material has been here for awhile, we just had to find time to get to it. 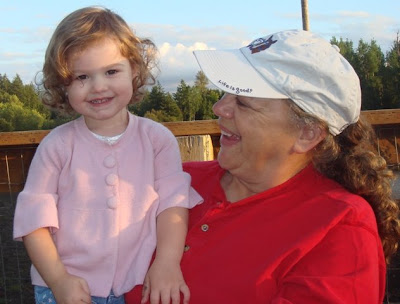 Erin and the grandkids came down this afternoon to go shopping for school supplies and clothes. I haven’t done that in a few years! Nearly 20! It was fun! Here is my little 2 year old granddaughter. Even with chocolate on her face, she's a pretty cute kid! 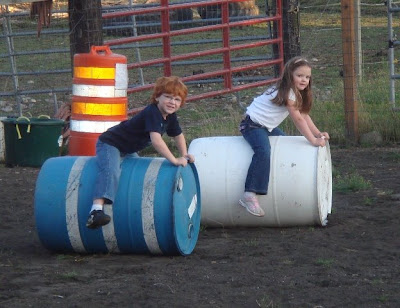 You've gotta start somewhere and this is a pretty safe way to do it. 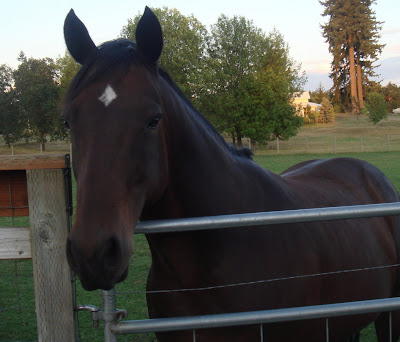 Just thought I'd throw in this handsome picture of my boy Danny. I wish I had more time to spend with this guy. He's really a sweet horse.

But he was lame most the summer from the abscess he suffered a while back (see post below). He has been improving, but it will be an issue until until I can get it completely exposed. Which could take another 9 months.

Abscesses can be such a crippling condition, which just isn't realized by many horsepeople, farriers and vets.

I have to wonder how many horses have been put down due to a mystery chronic lameness when the problem was an abscess. Something that would have eventually resolved itself. That's another issue with horseshoes. Shoes will cause a stagnation in hoof growth and healing so tenderness and sensitivity from an abscess can reside in a shod hoof for many years.

Things are getting busier with trimming and I have a clinic coming up at the end of this week. That's always a busy three days that tends to wear me out.

On the 3rd, we're leaving for Pagosa Springs, Colorado, to the 2008 Parelli Savvy Conference. Road Trip!

The following weekend is book up as well. Sheesh!

Update on Cricket and Classy (Bobbi) 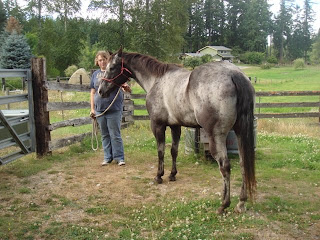 Cricket is doing much better. We still have a bit of new wall to grow out so she's still a little tenderfooted at times on the front. She is about 14.3 hands, and 13 years old. And as far as I can tell, she hasn't had much training, but we have saddled her and had several people on her back and she doesn't seem to mind. Have done some natural horsemanship training with her and she's very easy to get along with. She will usually let you catch her in the pasture. My neice is her adoptive owner. 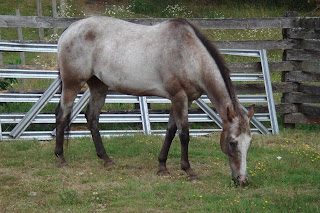 Classy is sound now. Fat and sassy. She is a done that-been there kind of horse. She's 18 years old. She loads, clips, baths, great with her hooves, etc. I haven't really ridden her. I have been on her back. Very loving little horse who comes up to you in the pasture to be caught. I am her adoptive owner.

Soon I'll put up a new video to compare their movement from last fall to now. There is such a difference!
Posted by Pat at 10:09 PM No comments:

Neenah has the most amazing horsinality of any baby I've met. 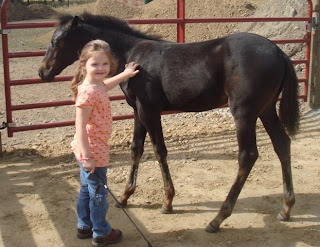 She has been so completely sweet and loving, it's kind of weird. 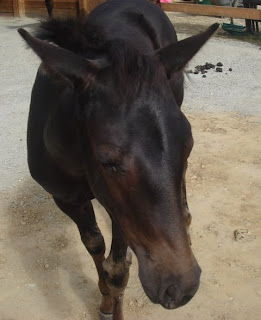 Most babies try a little nip, or kick now and then to see if they can get away with it. But I haven't seen anything, but a desire to be near humans. 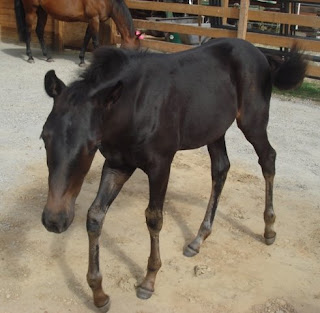 She feels no discomfort when I come up behind her and push her bottom around. I did the imprint training on her and just played with her everyday. Haltering her the first time was a non-event and she is really starting to give to pressure and lead very well already.

Rich and I have lots of projects going all the time. AND we have lots of "stuff" that I would like to either get rid of, or put away somewhere. But first, there is just so much to get done!

Last Saturday, Rich and neighor Jim started the board fencing across the front of the pasture and on Sunday we got busy preparing for the upcoming muddy season.

This project started a few weekends ago when Neighbor Jim and Rich removed the old dirt, shavings, decomposed hog fuel, etc that we had put in the main loafing shed/paddock area over the years. 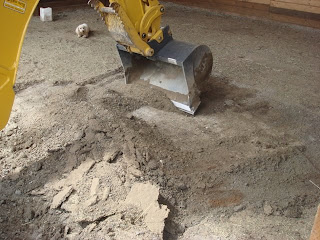 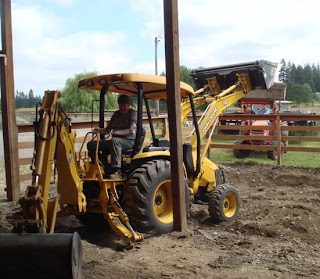 Then they replaced that material with 6 - 8 inches of pit run. 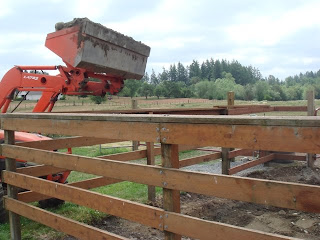 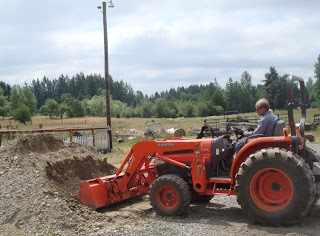 Last Sunday, we packed the layer of pit run (after letting the horses pack it down for a few weeks). Then Rich put a few inches of "top surface crushed rock" (3/4 minus crushed rock) and we packed that down. The horses will till the surface up a little bit, but it won't ever get as muddy in there as it has in winters past and cleaning up in there will be so much easier. 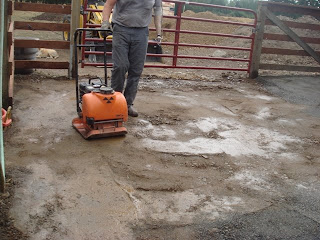 Packing the bottom layer of 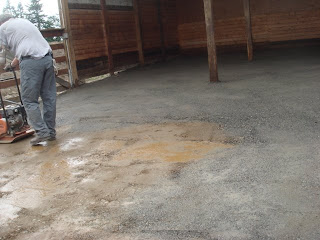 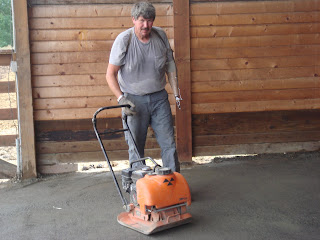 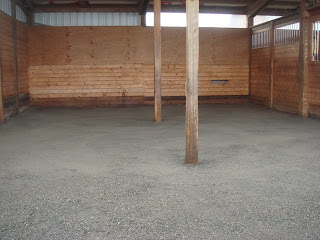 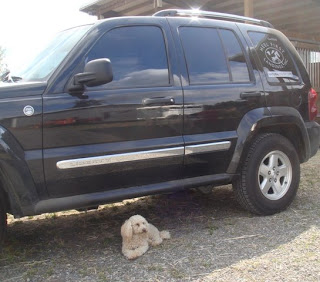 All work is supervised by the Scrunchster!
Posted by Pat at 7:05 AM No comments:

I've been asked to get some new pics of Neenah up, but keep forgetting to take pictures. Finally I remembered. She's slowly shedding her baby coat and turning very dark. Nearly black. 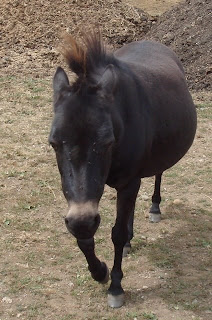 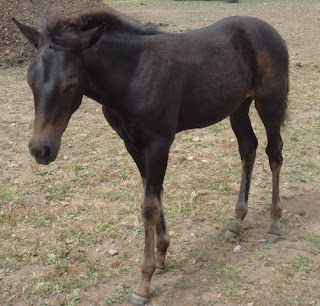 Here's Neenah. It's tricky getting a shot of her as she wants to get close in for scratching. 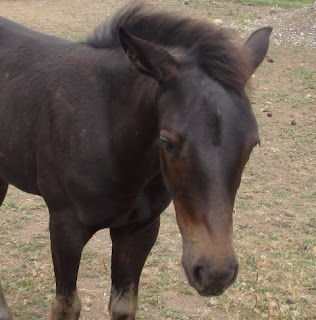 She and Min are super good friends. Like twins, but not. 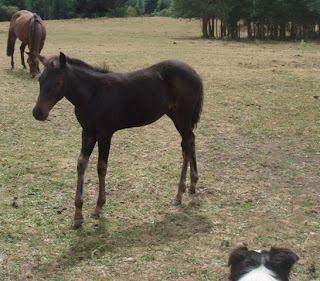 May is keeping her away from the camera. 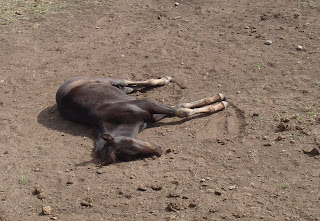 Hayin' Time at the HRC 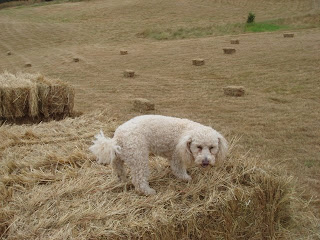 Last Friday, Rich and I found grass hay in the field for $3 a bale. We loaded the last 2oo bales on the field and got it home just before the rain came. 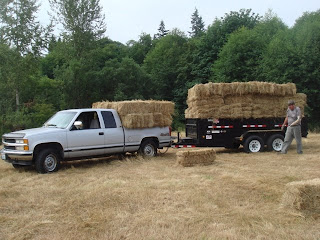 It took 2 trips to get it home in the old Cheve and utility trailer. Rich loaded every bale, I stacked it. We are a great team! 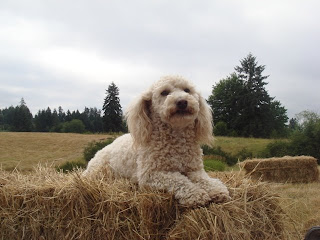 Our mascot, Scrunchie Joy. This is a new breed of farm dog, called a Curly Coated Cattle dog. They are very rare. 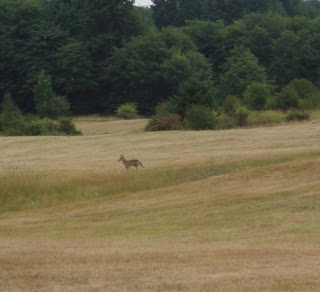 Coyote. These animals like to dine on Curly Coated Cattle Dogs. It saw ours running around the trailer and started hunting for her. She spent the rest of her time up on the hay bales watching him. I thought maybe he just wanted to play:0) 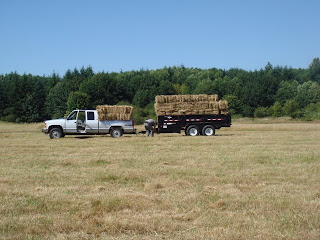 Heading out with the last load. Getting enough hay in for 16 equines is a lot of work. And this hay won't last long during the winter months.

It takes courage to ride beyond the status quo, but with each stride, the view along the trail becomes more and more esquisite.

"It only takes one sale to decide a horse's fate forever" (C. Ritlaw from her inspiring story about the Mustang named Scout in the Nov/Dec 09 issue of Equine Wellness)

"Those who say things can't be done should stand out of the way of those who are busy doing them."

Mother Nature provides enough food for every bird, but she doesn't throw it into the nest. 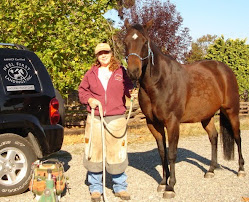 To arrange a clinic outside of the dates listed above, or at your site, please contact us at 360-790-4181 or patslark@live.com or patslark@fairpoint.net

Tools you will need:

The tool brands listed below are suggested as a result of the many types of tools that I have personally tested. I strongly encourage you to purchase the tools recommended below.

Learning a new skill such as hoof trimming, where you are working with sometimes uncooperative live animals, is challenging in itself. Inferior tools only add an unnecessary level of difficulty and risk (for horses and humans) to the job.

The brand we will work is The Knife brand hoof knife.

ONE HOOF KNIFE PER STUDENT.

We sell hoof knives and loop knives on site along with 14 inch nippers. They are not name brand tools, but much less expensive and will work temporarily.

The apron is a personal preference. I recommend a cordura and leather farrier apron by NC. Cordura stays a bit cooler in the summer months than an all leather apron.

(I've seen students struggle with many different styles and brands of aprons and so far NC offers the most comfort and functionality offering room in the side pocket for 2 tools.)

The Hoof Jack brand only. They offer a draft cradle and a mini stand and cradle. (Cheaper stands and similar styles are available, but we've tried them all and the Hoof Jack is the most user friendly. Used stands can sometimes be found on ebay and Craigs List.)

We have extra stands on site if you cannot get your stand in time for the clinic.

First Aid Kit is always smart to have on hand.

Most of the above list can be purchased at any Farrier Supply Store. (On-line as well.)

Participants who wish to bring their own horses should contact Pat for arrangements. Horses considered for the clinic should be cooperative with having their hooves handled for extended periods.

Clinics are held at the our farm:

Please note: there is a level of risk inherant to any job that involves very sharp tools to both students and horses. Liability waivers will be signed on day one.


"Those who already know it all when they come to class arrive with a learning disability." Jake Van Morrison